Tourism is an important source of income on Lombok.

We had no plan on arrival! Standing at the harbour we awaited the offers of the locals and there were enough. One man spoke to me and he seemed to be well organised  I decided to go for him. He wanted 6 passengers for his car and was charging 25$ per person for an 8 hour tour. We had offered to take Arthur with us as his wife Monika was off on a beach tour with another couple. We now needed another 3 to join us. We found an Austrian couple who wanted to join us and decided to pay an extra 5$ each to cover the 6th person and start our tour. The organising person had written down what we discussed and signed the paper explaining to his driver where to take us. Everything worked out fine but we all decided on our return, as did many other passengers that they did not really enjoy Lombok. Why? Because of the dirt and rubbish lying everywhere. Unfortunately the people on this island were not tidy. Where they stood they threw down their paper, plastic and other rubbish. Using a waste bin seems to be foreign to them.

We visited a small village first with a weaving factory and show room. This was interesting and the people very kind.

Thereafter we headed for our first temple. We found the charges to get into the temple were too high. 5$ per person so we were just about to leave when I managed to push the price down to $3. We still felt this was too high but wanted to see various temples. We later heard that the temples here are not as good as on Bali.

On arrival at the 2nd temple which again was to cost $5, Peter and I decided not to go in but instead to walk the street and look at the people, traffic and other activities. In the end only 1 out of 5 went in and finally paid 0,50 cents. She did not enjoy her visit. We continued passing through Matarem where we had originally planned on stopping to look around. However, on arrival we decided not to stop but continue to the next and final temple. Three of us went in. It was free entry. This proved quite interesting.

Finally we headed for the beach where we were to swim. On the way there I saw one beach and definitely would not have swum there, as it was filthy dirty. We finally arrived at a nicer beach with a restaurant set up for tourists. It looked inviting. We were immediately flooded by locals selling goods and offering us a massage. The price of $5 for a massage was good and we did not want to buy anything so at least by doing this I felt I was helping. Three of us decided to have a massage. Then the skies opened and it rained and rained and rained and did not stop!

We chatted to the locals for a while but then set back off to the ship. At the harbour it was still raining and very heavily. Back in our cabin we jumped under the shower and washed our clothes. The legs of my trousers had gone through ankle high water and I felt they and my shoes needed a shower too.

This island is not an island for us Europeans to drive on. Very dangerous! Hundreds of scooters darting in between the cars. They seemed to shoot out from nowhere.

It was an interesting day but not an island we would want to visit again. Peter did not enjoy this island and was very glad to return to our cabin. After a shower we quickly packed our few things together for Bali the next day. Most of our things are made up of Linda´s camera equipment!

The weather is good so we only need some shorts and bathing suits. We are looking forward to staying on Bali where we intend relaxing, doing some tours and swimming.

Lombok (size 4.725 square km), with a population of 2,4 million is an island in Indonesian. It is to the east of Bali on the other side of the Lombok Strait. The capital and largest city on the island is Matarem and has a population of approx. 360.000.

The Gili islands  are very popular with tourists. There are many places to dive and the beaches are lovely.

The island's indigenous Sasak people are predominantly Muslim, however before the arrival of Islam Lombok experienced a long period of Hindu and Buddhist influence that reached the island through Java. Islam may have first been brought to Lombok by traders in the 17th century who then established a following in eastern Lombok. Other accounts describe the first influences arriving in the first half of the sixteenth century.

Hinduism is followed by ethnic Balinese and by a minority of the indigenous Sasak. All the main Hindu religious ceremonies are celebrated in Lombok and there are many villages throughout Lombok that have a Hindu majority population.

On looking at my photos you will find that they speak for themselves.

(This island was the dirtiest that we have experienced.) A lot of passengers were shocked by the filth on the island. I found that I had blocked out the name of the island for a while after and just referred to it as the filthy island. Not a good recommendation for other visitors.

Craft Village where many tourists were taken to see the production of shawls.cloth & robes 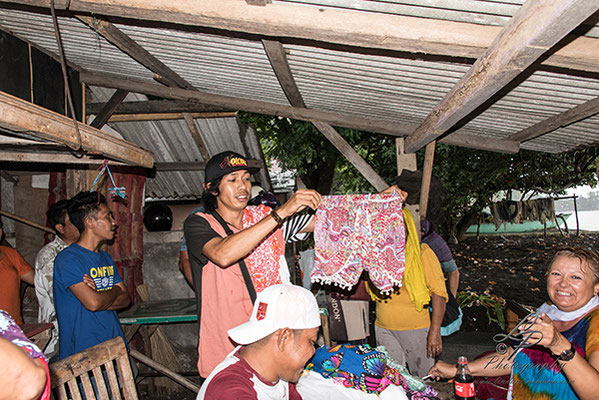 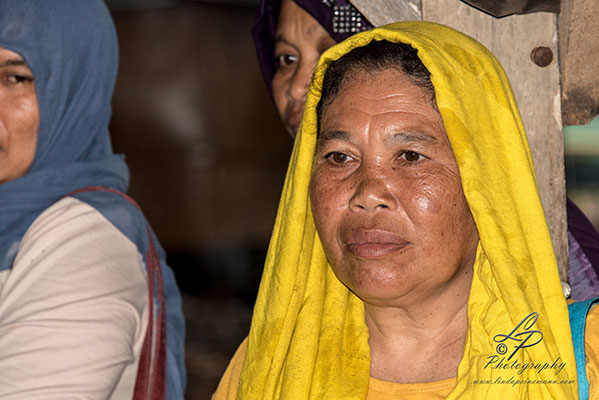